The insider Emily Rogers has unveiled some details about Mario + Rabbids Kingdom Battle, the title of the alleged crossover game between the Ubisoft series and mascots of Nintendo, never officially announced by the two companies but rumored since last summer. 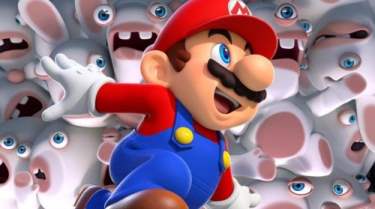 There have been publicly posted some unpublished details of Mario + Rabbids Kingdom Battle. Nor do we know if the crossover between the Super Mario series and the Rabbids from Rayman designed by Michel Ancel, which is also paid to some speculations,  really exists, but today we could learn something more.

As reported by Rogers, Mario + Rabbids Kingdom Battle will feature eight playable characters, including Yoshi, Peach, Mario and Luigi, players, however, but the players will not directly control these heroes, but “Tuttorio”, a kind of floating monster that will guide you in the adventure. The protagonists will also use various weapons such as guns and laser cannons, also it was confirmed the presence of a multiplayer co-op mode.

“Mario + Rabbids Kingdom Battle” has eight playable characters — including Mario, Luigi, Peach, and Yoshi — and they each have their own sci-fi weapons, laser guns, arm cannons, etc. But you don’t control the characters — you control Tuttorio, a small floating dish, to guide them through the worlds. There is also co-op multiplayer.

Mario + Rabbids Kingdom Battle could be announced at E3 2017 in Los Angeles, for the moment we invite you to take this news as an unconfirmed rumor.

Koei Tecmo has released for Japan 2 games on Nintendo Switch and plans to bring many more on the hybrid...