The same insider who shared the first OffScreen image of Assassin’s Creed Origins has also released on Reddit some interesting new details about the next episode of the saga. Below you can find all the leaked information, while reiterating at the moment that it is only a rumor not confirmed. 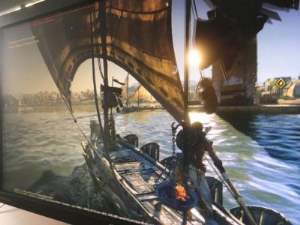 The insider Ummmlolwtf tells us that the game is developed by a large team composed of the same members who worked on Assassin’s Creed IV Black Flag, Ashraf Ismail should be the project director and Darby McDevitt is working on the plot.

The game based in Ancient Egypt is confirmed as the main setting, it is set roughly between 2494 and 2345 BC. The protagonist should be equipped with shield, spear and bow, at least judging from the leaked screenshot in recent days. There are also ships present in the game (but probably not the naval battles, unlike what was initially reported) and horses to ride. It will also be possible to control an eagle. The combat system is defined similar to that of The Witcher 3 Wild Hunt, as for the content, we also talk about a game bigger than about three times compared to Assassin’s Creed 4. Desmond Miles will not appear in the game.

Assassin’s Creed Origins (unofficial title) will be unveiled at the end of May, with full reveal planned for E3 in Los Angeles, at the American Fair the publisher will publish a cinematic trailer, a gameplay trailer and will make a demo available to the press. The output seems to be planned for the month of October 2017 on PlayStation 4, Xbox One and PC while the title does not seem to be releasing on the Nintendo Switch console.

You can check the full unconfirmed details of Assassin’s Creed Origins below:

• The AC4 team is working on this. Ashraf Ismail is likely the game director and Darby McDevitt is likely the main writer.
• Ancient Egypt, supposedly in the Fifth Dynasty of the Old Kingdom (2494 to 2345 BC) if we go by the recent picture leak.
• The character has a shield, a spear and a bow.
• The game will feature naval gameplay (not naval combat though) and horse gameplay. Mirages are likely a part of the game as well.
• Someone in the game will be called “The Crocodile”
• There will be smaller gameplay segments taking place in the same setting but different time periods. • Perhaps this will be the modern day segments? Darby did say a long time ago the best way to do modern day is to reuse the historical assets in a modern context, akin to Brotherhood.
• Interiors are in the game (not surprising obviously)
• Combat is supposedly ‘freeform’, similar to Witcher 3. In fact the game itself has a ‘witcher’ feel to it.
• The world is seamless. You can go from water to land to city without a loading screen.
• Ubi will start their marketing campaign by the end of this month, with a full reveal at E3, including cinematic and gameplay trailers and gameplay demos.
• Desmond Miles will NOT be in the game.
• There will be a controllable pet eagle. I imagine this will be an interactive version of eagle vision.
• The game is roughly 3 times the size of AC4.
• Will likely release in October.
• Said to be very colourful, as evident somewhat in the picture.
• The game features Khenut, the Queen of Egypt during the Fifth Dynasty of the Old Kingdom, and is the wife of King Unas.
• The game will release on PS4, Xbox One and PC. It will NOT release on the Nintendo Switch

In the latest issue of Weekly Jump, it was officially announced the new title of One Piece: Unlimited World Red...