Microsoft: The Coalition Is Not Working On A New IP 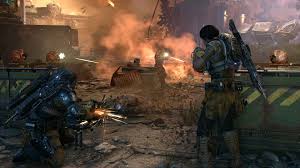 Microsoft has categorically denied the involvement of The Coalition in the development of a new IP. The studio was born with the aim of carrying on the franchise of Gears of War and will, therefore, continue to work exclusively on the series in question.

The confirmation comes directly from the multimedia production company Storylab Productions, which currently acts as an official external supplier of Microsoft, via GamesRadar. In that sense, a Microsoft representative re-confirmed that “The Coalition is exclusively focused on Gears of War” and said nothing else.

The page mentioning that The Coalition is working on a New IP which is “Currently In Production 2017” (as shown in the image at the top of the news) does not exist now.  So it could be possible that someone has made a mistake about a new IP in production.

The studio has already made its contribution to the creation of Gears of War 4, having given additional staff to The Coalition and technological support for the development of the third-person-shooter.

At the moment, unfortunately, we do not have further information on the project in question. The fact that it is a new IP, however, is surprising since some recent rumors had talked about a new chapter of Perfect Dark developed in the third person and in development at the studios of The Coalition and other companies not better specified.

Maybe, the “new IP” simply meant a new chapter in the series? Or, while reading the working title of a new Gears of War, has anyone interpreted it as a completely new game? Difficult to say. The mystery will be solved when The Coalition can talk about what it is working on.