According to a filtration, it is very likely that Halo Wars 2 will get an Open Beta that would start next week, in the development of E3 2016. The test phase is scheduled for June 13 and end on 29 of this month. 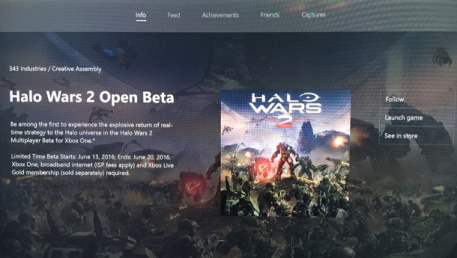 Announced at the end of Microsoft conference at the gamescom 2015, Halo Wars 2 is a game as a result of the RTS taking place in the world of Master Chief that appeared in 2009. If you are also in a hurry to test this new title, know that an open beta phase is planned and the dates have just made their appearance on the Web.

Precisely on Monday June 13 the press conference of Microsoft will be held at E3 2016, and the Open Beta is expected to be announced during the presentation ceremony of Xbox. “Be among the firstt to experience the explosive return of real-time strategy to the Halo universe in the Halo Wars 2 Multiplayer Beta for Xbox One” reads the description of the Beta.

The game will support online play for up to 6 people and so far no information regarding a Beta version of this issue is announced for Windows 10. The development of Halo Wars 2 was announced since last year and is in charge of Total War and Creative Assembly.

The original Halo Wars, created by the late developer Ensemble Studios, was released in 2009. In 2013, Microsoft stated that 343 Industries was considering a new Halo Wars.

Obviously, it is not an official announcement, but there is a safe bet that Microsoft will unveil something along with a trailer during its pre-E3 conference. Recall that Halo Wars 2 is expected on PC and Xbox One for Q4 2016.

Pending the arrival of the story mode of Street Fighter V which is scheduled for this June, Capcom has shared...