Today, through a press release, Microsoft announced that it is now possible to pre-order Windows 10 PC titles from the Windows Store, this to prepare the Xbox Play Anywhere feature that will arrive within a few days. 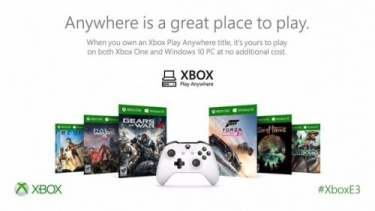 Thus, players can pre-order from now titles like Recore, Forza Horizon 3 and Gears of War 4, which will be available this year in Xbox Play Anywhere program.

If you still have any doubt about this feature of Xbox Play Anywhere, we must tell you that when you buy a digital game in the Windows Store that is part of this program, it will be yours to play on both Xbox One and your PC with Windows 10, with no additional charge at all.

Also, when you’re playing an Xbox Play Anywhere title, you can stop the game and pick up from the last saved game either on Xbox One or PC, carrying all your downloadable content and achievements.

The first game with these features will be Recore, platform title that will debut on September 13. Later, players can put their hands on Forza Horizon 3 on September 23 and the last title of this year as part of the Xbox Play Anywhere lineup will be Gears of War 4, available on October 11.

Microsoft said that some games will be part of Microsoft Studios Xbox Play Anywhere program, although we still have no information about the titles that will be added in 2017.

Report: Nintendo NX could use cartridges instead of discs

Report: Nintendo NX could use cartridges instead of discs

The Wall Street Journal does echoes a series of leaks, according to the medium of sources close to Nintendo, of...