Epic Tavern, a tavern management sim with rich RPG storytelling where players manage a pub frequented by Adventurers and direct patrons through rich quests that permanently alter the world, launches on Windows in QX 2016. 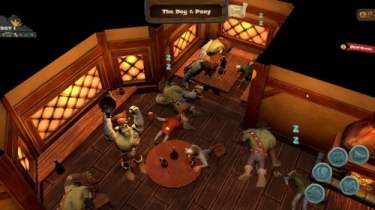 Epic Tavern takes place in a vibrant fantasy world which is highly malleable based on the decisions Tavernmasters make in their watering hole. The tavern can become a money-focused profiteering venture, a treacherous hive of scum and villainy or a beacon of hope to the Land.

As Tavernmaster, players customize and improve their establishment to attract the type of clientele they desire. Next, they send Adventurers into the world to complete quests. The success of their questing patrons, each with distinct skills, personalities and secrets, depends on Tavernmasters assembling the right party, equipped with the proper gear.

Each quest has permanent and irreversible effects on individual Adventurers, the tavern’s atmosphere and the greater world.

For example, if an adventurer is sent on a quest to kill a goblin chieftain and succeeds, they earn the title of The Goblin Slayer and their future goblin encounters become more dangerous. If the Tavernmaster instead chooses peace, Goblin Ale may appear in the tavern, attracting a wider variety of Adventurers who can be sent on future quests.

A Tavernmaster’s decisions determine whether their pub is frequented by armor-clad human warriors, hulking goblins, powerful pint-sized mages or one of many other Adventurer classes to be revealed in the coming months.

Epic Tavern seamlessly blends elements from titles the team worked on when employed at other companies, including Dragon Age, The Sims and Deus Ex.

“Epic Tavern’s dynamic quest lines and macro-level party management fuels an RPG that places the fate of a tavern, its patrons and the surrounding world in the hands of the Tavernmaster,” said Rich Bisso, CTO and co-founder at Hyperkinetic Studios. “Brimming with tough decisions that have lasting consequences, Epic Tavern’s world is constantly reacting to the Tavernmaster’s influence.”

Having aroused interest among the players, Unravel benefits with a second episode. Indeed, the Coldwood Interactive studio has signed a...